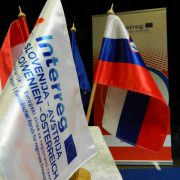 Today, on 26 April 2018, 15 Subsidy contracts for the co-financing with funds from the European Regional Development Fund (ERDF) were signed in the premises of the Center for space technology Herman Potočnik Noordung in Vitanje, Slovenia, in the frame of the Cooperation Programme Interreg V-A Slovenia-Austria for the programme period 2014-2020. Together with the 23 projects that are already being implemented and the three projects that will sign their contracts afterwards, there are 41 approved projects in the frame of the programme. 89 percent of the programme funds will be contracted which ranks the programme among the leading ones in the EU.

In the period 2014-2020, the cross-border cooperation will be further strengthened, therefore, also in the future the two countries expect successful connections on both sides of the border and joint projects that will contribute to improving the quality of life of the inhabitants of the common border area. The projects contribute to the understanding of diversity, enrich us mentally and conceptually and promote awareness that our neighbourhood is not foreign but part of a common Europe. Especially the cultural, economic, social, political and other diversities of the two countries participating in the programme represent an advantage, which has to be mutually recognized, since more Europe in practice also means more ideas and sustainable solutions.

The Open Call with several deadlines for the submission of project applications, in the frame of which the Subsidy contracts were signed today, was published in December 2015. Beneficiaries from both sides of the border (17 regions are eligible: in Slovenia Gorenjska, Koroška, Savinjska, Podravska, Pomurska, Osrednjeslovenska, Goriška and Zasavska region; and in Austria Oststeiermark, West- und Südsteiermark, Graz, Östliche Obersteiermark, Westliche Obersteiermark, Unterkärnten, Klagenfurt-Villach, Oberkärnten and Südburgenland) can candidate in the frame of the open call in which a little less than 45 Mio EUR ERDF funds were available for projects, content wise related to strengthening cross-border competitiveness, research and innovation, protecting the environment and promoting resource efficiency and enhancing institutional capacity and an efficient public administration. The first submission deadline closed in February, the second in July 2016. The third deadline for the submission of applications, in which 44 project applications were submitted, closed on 14 September 2017. The final decision on their approval was taken in the beginning of March 2018 by the  Monitoring Committee, composed of representatives from both participating countries. In the frame of the third deadline, 18 projects in the total amount of a bit more than 18,5 Mio EUR ERDF were approved. The Head of the Managing Authority, mag. Nina Seljak, signed the Subsidy contracts with the representatives of 15 Lead Partners of the approved projects, namely Castle Road, Connect SME Plus, COOP4HEALTHCARE, CROSSRISK, EUREVITA, FIREEXPERT, GO 2 BENELUX AND SCANDINAVIA, goMURra, Innovative Location, INNOVET, INVOLVED, NaKult, PolyMetal, SMART Tourist and START CIRCLES.

The next, fourth deadline for submission of applications is open until 28 November 2018. In its frame, about 10 percent of the tendered funds are still available. Information about the available funds per priority axis together with guidelines connected to the achieving of the programme indicators, will soon be published on the programme website.