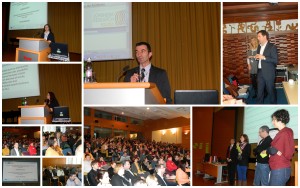 In the frame of the preparations of the Programme of cross-border cooperation between the Republic of Slovenia and the Republic of Austria in the financial perspective 2014-2020, the Ministry of Economic Development and Technology (MEDT), which is the Managing Authority for the programme in the current financial period 2007-2013, organized a conference on cross-border cooperation of the two countries in the upcoming seven year period on 29 January 2014 in Radenci, Slovenia. The event provided an opportunity for networking, sharing experience with project partners of other projects and the representatives of the programme bodies and for the development of ideas for potential projects. In the frame of the workshops, the participants also had the opportunity to receive concrete explanations to their questions.

At the conference, the experience with the implementation of the current 67 million euros worth cross-border programme Slovenia-Austria 2007-2013 (in the frame of which there were 77 projects contracted which practically represent all available funds) were presented, thus the focus was primarily on the financial period 2014-2020 and the bilaterally selected thematic objectives which will be co-financed in the following seven year period. In parallel to the implementation of programme activities and the monitoring of the projects that are being co-financed in the frame of the Operational Programme Slovenia-Austria 2007-2013, also activities in connection with the preparation of the content and the structure of the programme of cross-border cooperation between the two partner countries in the future seven year period are taking place. Thus, in the future, the programme funds of around 48 million euros in funding from the European Regional Development Fund will therefore support the strengthening of research, technological development and innovation, the enhancement of the competitiveness of small and medium-sized enterprises, the promotion of environmental protection and an efficient use of resources and the enhancement of institutional capacity and an efficient public administration.

Slovenia and Austria are acceding to the fourth financial period in which projects are being co-financed with European funds. Based on the good bilateral relations between the two countries involved in the programme, a number of bilateral projects have been implemented that strengthen the knowledge of the border regions and contribute to cross-border integration and cooperation. The results of those projects are visible on both sides of the border.

Besides, the conference in Radenci was only one event in a series of activities that will assist both countries involved in the current programme to prepare a strategic document, which has to be submitted for approval to the European Commission by 22 September 2014, for the financing of the joint projects with funds from the European Regional Development Fund.