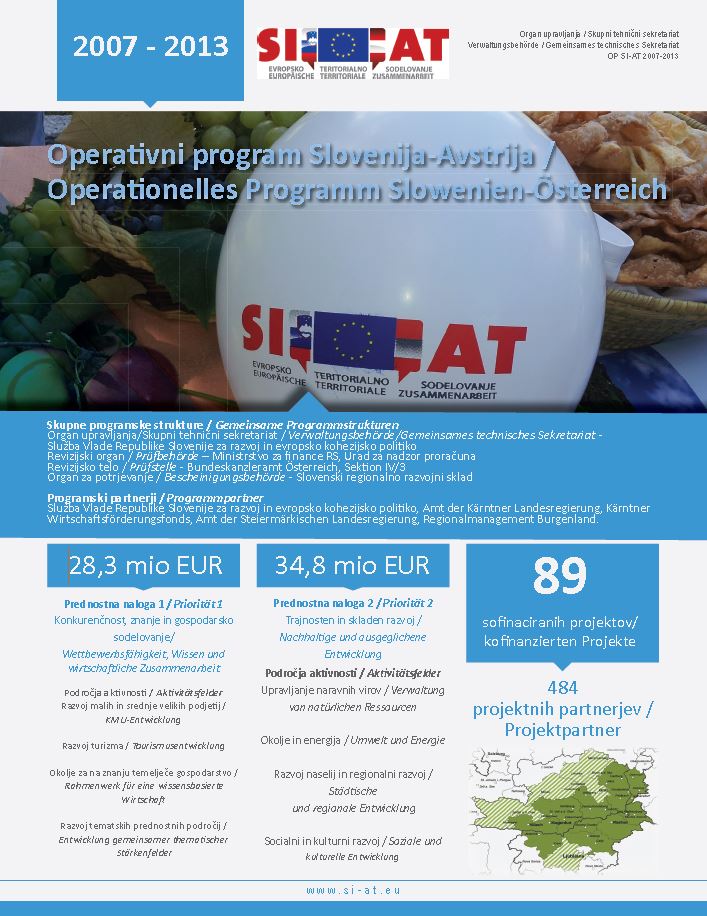 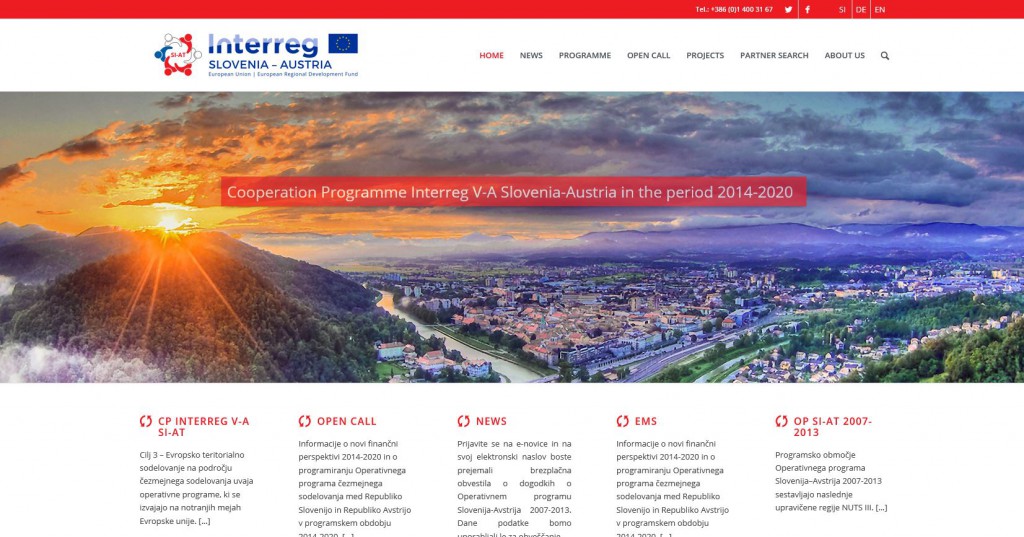 We would like to inform you that on 18 December 2015 the new website of the Cooperation Programme Interreg V-A Slovenia-Austria for the period 2014-2020 will be launched, which you will be able to access under the same address as until now (www.si-at.eu). Due to the transfer of the website into a new environment, in which you will also be able to access the current website of the Operational Programme Slovenia-Austria 2007-2013, the E-Newsletter subscription in the frame of the OP SI-AT 2007-2013 will be discontinued. In order to receive further E-Newsletters in the frame of the Cooperation Programme Interreg V-A Slovenia-Austria, you will be shortly able to register on the new website.

At the same time, we would like to inform you that until the end of tomorrow, also the Open Call for Proposals in the frame of the Cooperation Programme Interreg V-A Slovenia-Austria for the period 2014-2020 will be published on the new website. 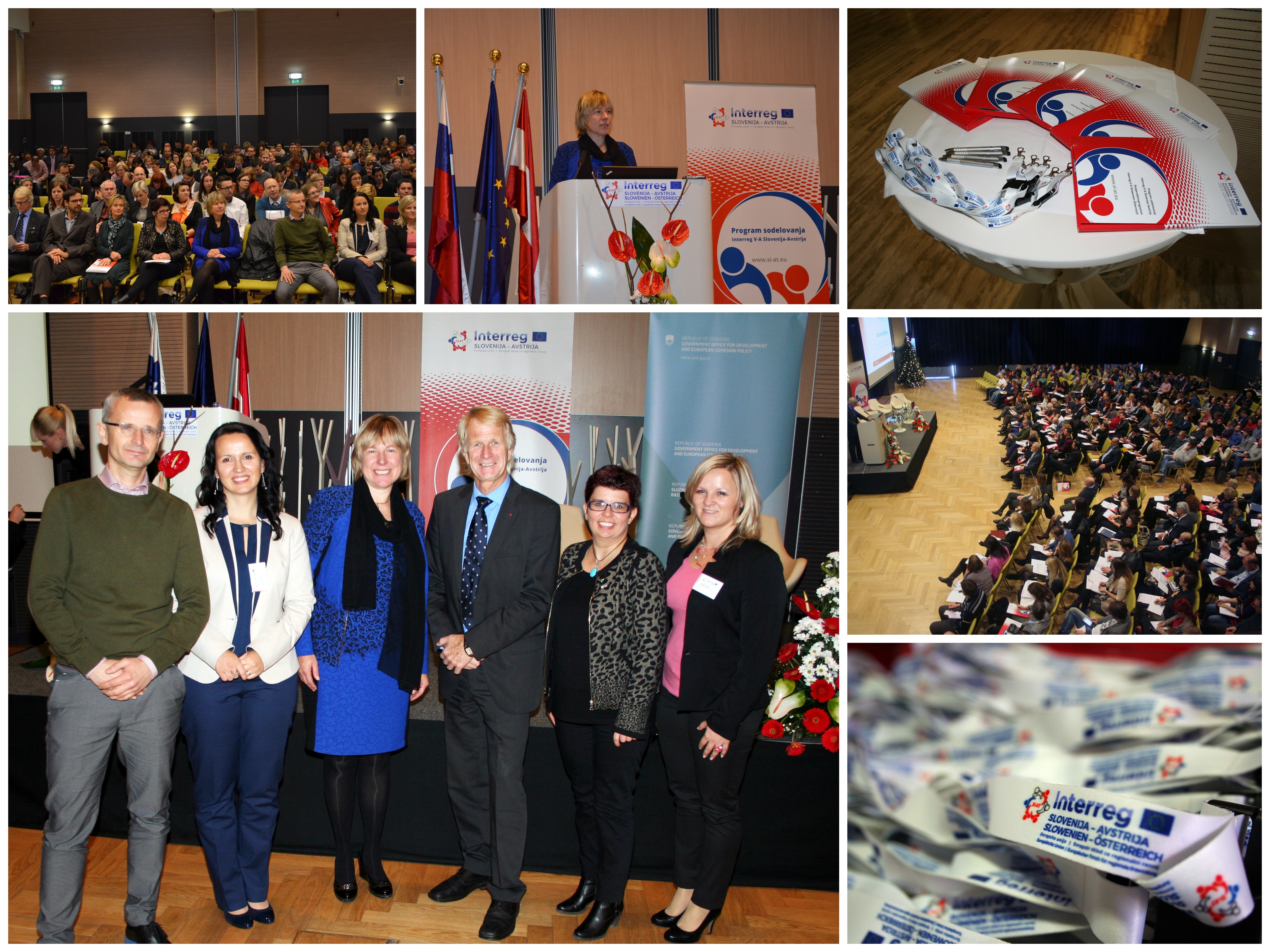 On 2 December 2015, the Government Office of the Republic of Slovenia for Development and European Cohesion as the Managing Authority in the period 2014-2020 organized the kick-off event in Laško in Slovenia, which was dedicated to the presentation of the Cooperation Programme Interreg V-A Slovenia-Austria. The Minister for Development, Strategic Projects and Cohesion, Alenka Smerkolj, gave a speech in which she expressed the belief that the cooperation in the programme will help eliminate the border barriers and strengthen the cross-border cooperation. In the programme period 2014-2020, the successful European territorial cooperation between Slovenia and its neighbouring countries will continue, in which various applicants may realize their ideas and are able to implement sustainable solutions through the cooperation with their cross-border partners.

The overall objective of the Cooperation Programme is to ensure the harmonious development of participating cross-border regions and to enable all citizens to make the best use of given natural conditions and opportunities.
Despite similarities to the 2007-2013 period, the beneficiaries in the period 2014-2020 will have to put more efforts in the development and visibility of project results. “I wish you the best possible co-operation with cross-border partners, openness to new ideas and a happy hand and a lot of courage in the preparation and implementation of projects. Even when major obstacles cross your path” said Alenka Smerkolj.

Within the frame of the Cooperation Program between Slovenia and Austria, approved by the European Commission on 16 September 2015, 44.9 million Euro funding from the European Regional Development Fund are available for projects (i.e. 18 million Euro less than was earmarked for projects in the period 2007-2013). The programme area covers eight Slovenian and nine Austrian regions, whereby the Goriška and Zasavska region newly joined the program area. For a maximum 85 percent co-financing projects may candidate that will contribute to the strengthening of research, technological development and innovation, preservation and promotion of cultural and natural heritage, the development of common tourism products, improving the conditions for the usage of joint cross-border entrepreneurial potential, social, cultural and regional development of the program area.

The participants were addressed by representatives of the two partner countries. The opening speech was held by the president of the Council and Development Council of the Savinjska region, mag. Branko Kidrič. The participants were welcomed also by representatives of the Republic of Austria, namely the parliamentarians of the regional parliaments of Styria and Carinthia, Mag. Bernadette Kerschler and Ing. Manfred Ebner. Lena Andersson Pench, Director of the Directorate-General for Regional Policy in the European Commission welcomed the participants of the event in the frame of a video message.

In the second part of the event, programme manager Laura Lajh Rauter, presented the Cooperation Programme Interreg V-A Slovenia-Austria in the period 2014-2020. The Head of the Cross-border programmes management division and at the same time Deputy Head of the Managing Authority, Dimitrij Pur, outlined the differences between the programme periods 2014-2020 and 2007-2013. Mojca Trafela, Head of the Joint Secretariat, then provided the first information about the Open Call. The Call in the frame of the programme will be published on 18 December 2015. The workshops for applicants are foreseen in January 2016. The first deadline for submitting project proposals is 12 February 2016.

In the frame of the event, the slogan of the programme was introduced. The winner of the slogan competition, Ksenija Skela, submitted the winning proposal “For a better future” already in September 2015 to the Joint Secretariat.

The event concluded with the presentation of two successfully implemented projects from the period 2007-2013. Mag. Suzana Fajmut Štrucl and Mag. Gerald Hartmann were sharing their experience with the implementation of the project Geopark, while Dipl. Ing. Dr. Gerald Steinbauer presented a rescue robot, his experience and proposals for improvements and gave the potential applicants among the audience practical advice based on the experience with the project TEDUSAR.

The event was attended by almost 400 people, keynote speakers from both countries, programme partners and interested applicants from the programme area.

The programme of the event was enriched by music pieces by Manca Knez on the lyre, accompanied by the singers Špela Cehnar and Valentina Reberšak as well as the performances of the TRIO ALPEHA from Šmihel/St. Michael in Carinthia.

For the presentations in Slovene language, please see our Slovenian part of the website.

For the presentations in German language, please see our German part of the website. 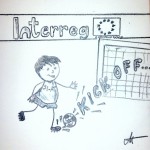 The Government Office for Development and European Cohesion Policy, the Managing Authority, invites you to the opening event of the Cooperation Programme Interreg V-A Slovenia-Austria.

During the event, the new challenges will be presented, with which the beneficiaries will be faced in the programme period 2014-2020. In addition, general information about the Open Call for funds from the European Regional Development Fund will be provided.

The event will be held in German and Slovene language. Simultaneous translation will be ensured.

Please confirm your attendance by 30 November 2015 via email to si-at.svrk@gov.si (the number of participants is limited).

You are cordially invited!

We would like to inform you that the Kick-off event for the presentation of the Cooperation Programme Interreg V-A Slovenia-Austria will be organised by the Government Office for Development and European Cohesion Policy, acting as the Managing Authority on 2 December 2015 in Laško (Slovenia).
The invitation with the detailed program will be published soon.

The event will present new challenges to be faced by beneficiaries in the programme period 2014-2020 and will provide general information related to the Open Call for Proposals for the funds of the European Regional Development Fund.

Mark the 2nd December 2015 on your calendar already now. 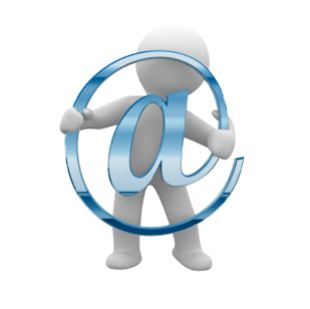 We would like to inform you that the common e-mail address of the cross-border cooperation programme between Slovenia and Austria has changed. The current e-mail address jts-si-at.svlr@gov.si will enable the redirection of messages until the end of 2015. However, we kindly ask you to send all your messages to the new e-mail address si-at.svrk@gov.si which will be used for communication in the frame of the programme for the period 2007-2013 as well as also connected to all communication related to the programme in the period 2014-2020. 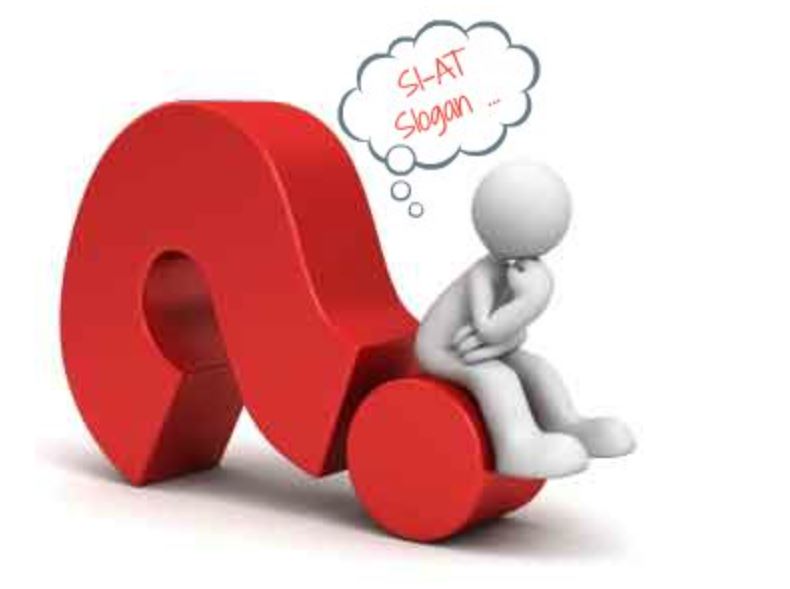 The Slogan contest’s goal is to encourage individuals inside and outside the eligible programme area to think about European Territorial Cooperation and especially the cross-border cooperation between Slovenia and Austria in the period 2014-2020 and create slogans on thoughts, associations, ideas, etc. connected to cooperation between those two countries.

You have time until 30 September 2015 to send us your proposals. In order to participate, all you have to do is to create a slogan and send it to the JTS e-mail address (jts-si-at.svlr@gov.si) with the subject “Slogan contest”. The slogan has to contain the following:
– The length of the slogan may not exceed a maximum length of 60 characters including spaces.
– The slogan should be innovative and connected to the programme (cross-border cooperation).
– The slogan will be used in three languages (English, Slovenian and German), therefore, it has to be translatable.

The competition is open to everyone from the eligible programme area and outside from it, professional or amateur.

The competition rewards the best slogan received. The inventor will be invited to the kick-off meeting for the Cooperation Programme of cross-border cooperation between Slovenia and Austria which is foreseen in December 2015 where he or she will be introduced as the author of the slogan and receive a symbolic award. The winning slogan will be used in the frame of the new website design and for the promotion of the Cooperation Programme throughout the whole programme period 2014-2020.

We are looking forward to receiving your proposals! 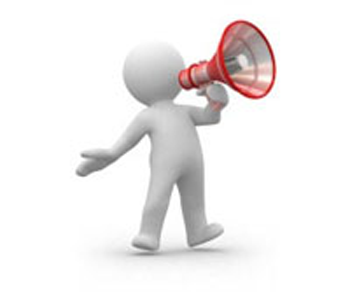 Numerous legal and administrative borders still exist and add a burden on cross border activities. As a result, a significant economic potential remains untapped in our border regions. With this public consultation, the Commission will be able to take stock of the opinion of 185 million EU citizens living in border regions in regards to the obstacles they are facing in their everyday life and their suggestions on how to overcome them.

The Commission intends to make concrete proposals to solve remaining cross border issues and needs the valuable input of the citizens who are facing these obstacles on a daily basis.

The questionnaire is available in all 24 languages of the EU and will be open until 21 December 2015.

Many thanks for your support. 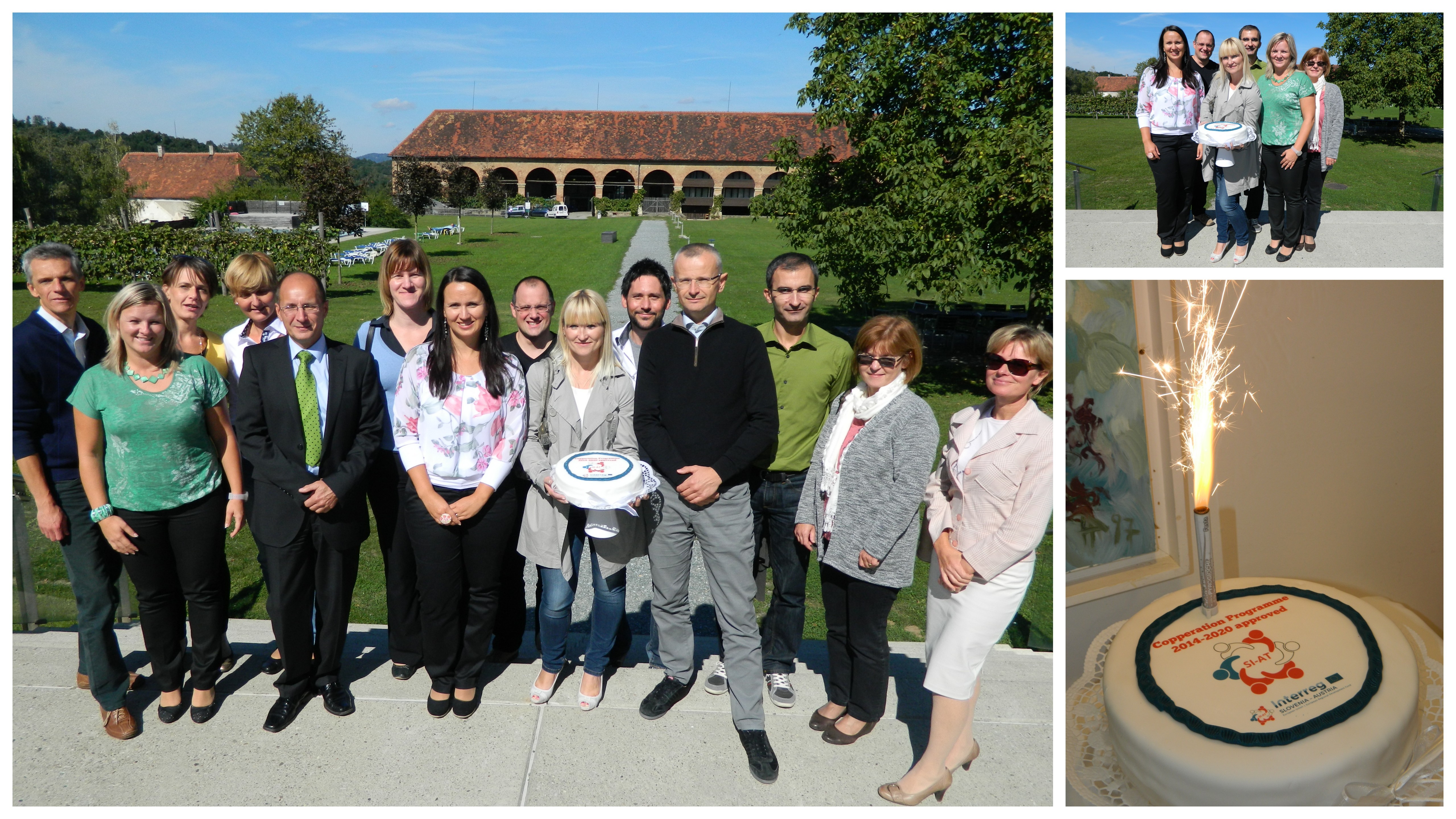 Today, the last, 25th Task Force meeting for the programming of the Cross-border Cooperation Programme Interreg V-A Slovenia-Austria was held in Seggau, Austria.

Only a few days after the approval of the Cooperation Programme by the European Commission, the programme partners also officially concluded the programming period and will continue with the preparation of documents relevant for the implementation of the programme.

We are glad to inform you that the European Commission has formally approved the Cooperation Programme Interreg V-A Slovenia-Austria for the programme period 2014-2020 (CP Interreg SI-AT).

The approval concludes a process of programme preparation that has spanned over 2 years. Regional and national stakeholders and the interested public in both partner countries as well as the responsible programme bodies and external experts have contributed to the development of the content of the new Cooperation Programme.

The Project Partners will, together with their cross-border partners, have the opportunity to “open borders” through seeking new developmental opportunities beyond the borders and through the creation of developmental solutions in the frame of the entire programme area in Slovenia and Austria.

The Open Call and the application pack (Implementation Manual for Beneficiaries, Annexes to the application form, etc.) will be published in mid-December 2015. In December, also the kick-off event of the programme and the workshops for applicants are foreseen.

For more information about the CP Interreg SI-AT 2014-2020, have a look at the approved Cooperation Programme.